I’m not one to EVER comment on another man’s wife, girlfriend, whatever, & I don’t personally know Mrs. Curry, but I know craycray’s like her!
Every guy does! 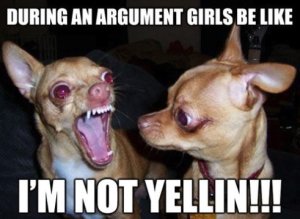 We have ALL dated that ghetto, loudmouth, ‘I’m just passionate’ girl who gets us involved in some drama we don’t have any interest in.
That bar fight that started because she wouldn’t just let it go.
That party that you had to leave because she didn’t like how some girl was looking at you.
That embarrassing moment when she was talking loud because ‘no one was gonna disrespect her like THAT!’
[Seriously, I’m having bad flashbacks right now!]
Now, it’s a funny story to tell AFTERWARDS, but in the moment, that sh*t is awful!
You can’t shut her up, you can’t ‘ssshhh’ her, ask her to go talk in private, etc.
Nope, this just riles up crazy!
Want to ignore the situation, &a let her go fight that fight alone?
Ooooh, you REALLY just f’ed up my friend!
Hope you’re not trying to go home together, or wanted to have sex with her again, because it ain’t happening.
[shaking my head again …. seriously, these flashbacks are killing me!]
From white girls, to black girls, to Latin girls, it does NOT matter, this is universal …. trust me, I KNOW!!!
So guys, all I can say is this, when crazypants’ decibel level starts to rise at an alarming rate, that look comes over her (you know THE LOOK), & she is clearly has lost all control of her hands, neck, you have 2 choices.
1. Decide it’s worth it & accept the fact that ridicule, shame, embarrassment, banning & a potential fight is gonna break out (most likely between you & some guy twice your size OR multiple guys!)
or
2. You can put your drink down, stop enjoying that amazing meal, or whatever pleasantry you were engaging in, get up, turn around & walk away as if you are NOT with the crazy person you are clearly with. It’ll be awkward, but you’ll be a happy, drama free man!

ps. Now everyone is saying ‘she was standing by her man!’
Umm, last I checked, a real man doesn’t need you acting all ghetto in public to be ‘standing by his side’.
That’s just me.
I need you standing by my side when it comes to figuring out how to raise our kids, provide for our future, etc, NOT getting me into a damn fight because you can’t control your big ass mouth.
Causing me grief, & embarrassment, isn’t ‘standing by my side’.
If any woman I dated thought it was, she’d be standing by my shadows side, because I’d be gone.

pss. Now ladies, I DO realize there are some jackass guys who act like this, so if you’re dating one of these insecure mental midgets, you too need to LEAVE!